The Chinese government is guilty of mass genocide against the Tibetans and yet only one country; Uruguay, openly stands by Tibet and its people. I am not saying all Chinese are bad, just their current government. As are the governments of many countries today when they seemingly just focus on power, commerce and self-gain without any further thought towards their subjects and all the other inhabitants we share this planet with.

See the end of this page for links to other sites for further information or ways in which you can help the Tibetans.

The fact that Tibetans are now the minority group in their own country is very sad indeed. Here are some very heartbreaking attention-grabbing facts:

Forced to denounce the Dalai Lama, Tibet's spiritual and temporal leader, his chosen Panchen Lama; Tibetans must pledge their allegiance to the Chinese government. Failure to do so can result in imprisonment or other forms of punishment. Possessing an image of the Dalai Lama or Tibetan flag is still illegal in Tibet today.

More than 80% of Tibetans in the "TAR" (Tibet Autonomous Region) now live below the poverty line. I have met many Tibetans who are in Exile in Nepal and India which have confirmed these figures. Tibet will rise again one day as the spiritual centre of the world, but only when the time is right. 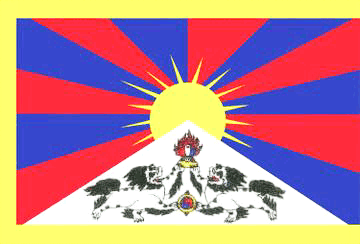 The Tibetan flag designed by the Great 5th Dalai Lama